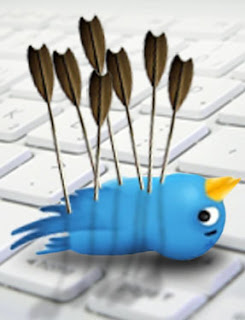 My relationship with Twitter is complicated. Twitter is the closest thing to a cultural heartbeat we currently have; it has made shared cultural events, such as award shows or the Olympics, more enjoyable. It is lightning fast at reporting breaking news and spreading vital messages, such as “hey there’s a revolution, let’s overthrow the government”. It can easily sniff out trends and is a valuable resource for science.

But it is wasteful. The “signal-to-noise” –ratio is very low.

Most of the time we are not sharing a cultural moment or we don’t have something vital of importance to share. I almost never overthrow governments. Still, the constant flow of tweets flow through the servers in an ever-marching parade of zen, not caring if anyone sees them or not. Most of the stuff being mundane repostings of news or just pointless personal messages from people who sometimes say something interesting.

I follow 952 people on Twitter, in the past hour I received 138 tweets. I think I spend maybe 30 minutes a day on Twitter, in perhaps three 10 minute chunks reading the Tweets from the past hour or so. So I receive around 3/24 of tweets that I ‘ve subscribe to, that’s around 13%. So, just using the amount of Tweets in the previous hour as an estimation I receive around 3.300 tweets a day, and the looking at the time estimation, I only read about 400 tweets a day. So most of the things pass through my feed unread.

This results in two main problems in my mind:

Firstly, the tweets that I read are selected by pure chance. There is no quality control, if I suspect someone I really like, for example @badbanana, has said something smart, I have to check it manually.

Secondly, I’ve managed to claw up to 1850 followers, which has made me practically a king-amongst-men in Twitter (in my own mind at least). But if my tweets have a reach that is comparable to the reach I calculated it means that any one of my own tweets only has the audience of 200 or so people. In reality I suspect that this number is even lower. Most people have a lot less followers than that, and the harsh reality is that they could probably get a bigger audience chatting in their workplace cafeteria than with their Tweets. This encourages post frequency over quality. More shouting, less thinking.

So what’s the solution? Twitter desperately needs a “like” or a “+1” button for the audience to indicate the best, most valuable tweets. Adding a quality indicator on top of the existing functionality would detract nothing from it’s existing utility, but would make it possible to find the more relevant content and reward me for spending time and effort tweeting something else than “Eating a bagel, yummy”. And no, retweets are not the mechanism I’m looking for, they actually just create more noise and add to the problem. I would like to know what people find valuable. And I would like to try to write valuable tweets. Help me do that, Twitter.
Posted by Unknown at 10:55 AM