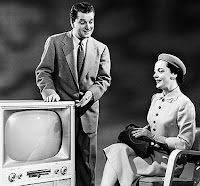 1. TV performs consistently, Social Media is erratic. It's hard work being interesting - and that's what social media is about. Holding someones interest in an environment that is totally democratized is very difficult. Basically Exxon and my Ex-girlfriend have equal tools to create social media content. The one who manages to get my attention and hold it or even more difficulty - manages to affect my behaviors or purchase decisions has to put a lot of effort into it. That's why the use of social media in marketing purposes is erratic - it's hit and miss. TV on the other hand is fairly consistent. A good tv ad with a healthy media budget attached is going to perform approximately the same way it did last year. When planning a business, reliability of forecasts are crucial. Oh yeah, and just because social media doesn't have a media budget doesn't make it free.

2. TV is pre-testable, Social Media needs optimization. Every social media consultant presents the wheel slide: listen, engage, converse, optimize. Or something like it. Basically it means: throw some spaghetti on the wall and see if it sticks. The good thing about TV-advertising is that it's 50 years old. We know how to test it. We know what people think and feel after they've seen it. We know how to deduce effects on sale. For social media, most of these things are still a mystery. If anything, there's too much data available through the social media monitoring tools. It is messy, labor-intensive and therefore expensive to sift through.

3. TV is low risk, Social Media is volatile. The risk of screwing up in social media is ever present. You could end up, for example, saying something insulting to your target audience or aiding sensitive information getting out. With TV, you can have an army of lawyers make sure you're good to go before you pull the trigger. With social media, you need expensive always-on publishing machines that check every tweet or facebook post with legal, comms, marketing and yo' momma before being able to do anything. Every time.


4. TV starts conversations in social media. Television is one of the strongest drivers of conversations in the western world. Personally I think Twitter has made it worth watching The Oscars again. The amount of snark and wittisisms is simply magnificent. Also the Superbowl is such a great experience, when one combines it with seeing what people say about the ads. Social media just usually responds to things that happen "in reality". And with reality, I mean The Bachelor.

5. TV dollars are measurable in both old and new metrics. Marketers love to see ROI numbers. In television ROI is calculated based on GRP's  and impact on sales. This is by no means perfect, as it is statistical averages and not real behavioral data. Social media enthusiasts pride with the fact that you can get actual behavioral data from social media. Well... there's no reason you couldn't do that with TV ad's as well. You can go in and "monitor the conversation" about your ad if you want to. What you do with that data is then up to you, your analytics team and the guy wearing a Transformers t-shirt claiming to be a "social media expert".


Alright, alright... I wanted to troll out a bit, so don't take these points too seriously, but I do think Social Media is over-hyped and it gets away with murder because, well,  it's cool. It's treated like magical pixie dust or a dark art where you need to have some secret special information to make it work. When in reality it is an extension of people's existing behaviors. Word-of-mouth existed before Twitter. People recommended good brands before the "like" button. TV and social media are not competitors, but compliments. They support each other. So instead of creating things for channels, like TV or "social", we should create things for humans.
Posted by Unknown at 11:39 AM